Heme oxygenase 1 (HO-1) is a 288 amino acid ER-associated membrane protein which harbors a large cytoplasmically exposed N-terminal domain and which is imbedded in the ER membrane through a single C-terminal transmembrane segment (TMS) 56. Unlike HO-1, HO-2 bears additional 30 amino acid residues at the N-terminus as well as two Cys-Pro dipeptides near the C-terminus known as heme regulatory motifs (HRMs) (Figure 3). Enzymologically, vmax of HO-2 and the Km for heme are approximately one-tenth and three times that of HO-1, respectively 65, 66. HO-1 and HO-2 are highly homologous and imbedded in the microsomal membrane via a similar C-terminal TMS 67. Proteolytic C-terminal cleavage of HO-1 results in its release from the ER and its translocation to the nucleus accompanied by a dramatical decrease of the enzymatic activity 15. 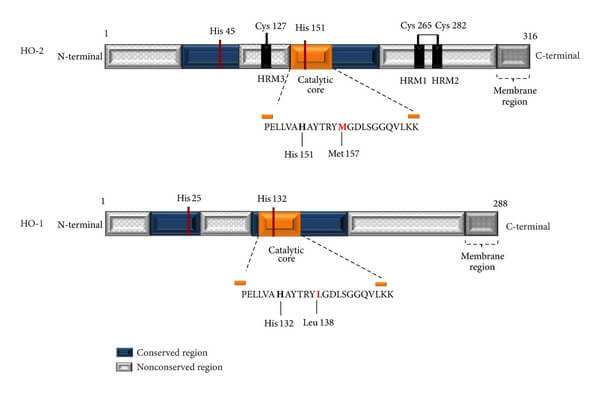 Similar to many other chaperones, HO-1 and HO-2 are phosphoproteins 68 in which phosphorylation regulates the activity of the molecules. Whereas HO-2 has been noted as being phosphorylated and thus activated by Ca2+/calmodulin 69 and casein kinase 2 (CK-2) 70, phosphorylation of HO-1 obviously occurs through activation of the survival kinase Akt-1 71. Also, expression and function of HO-1 and HO-2 can be further modulated by post-translational acetylation 72, 73. Acetylation of Lys243/256 in HO-1 has been implicated in HO-1-mediated tumorigenicity in xenograft models 72. HO turnover appears through the proteasomal system enabling efficient elimination of the molecule after ubiquitination 74, 75. The first characterized HOs, mammalian HO-1 as well as microbial HmuO and PigA/HemO, belong to the alpha-only protein class and share a common secondary structure bearing nine to ten α-helices and a highly conserved catalytic site in the cytoplasmic domain 76.

HO-1 has been assumed to exist as a monomer in cells due to the lack of cysteinyl residues required for the formation of disulfide bridges 77. However, recent investigations revealed that HO-1 forms dimers/oligomers (Figure 2) in the ER via TMS/TMS interactions as a prerequisite for optimal structural and functional qualities of the molecule 61. HemS from Yersinia enterocolitica and ChuS from E. coli act as monomers 78, 79, while PhuS from Pseudomonas aeruginosa crystalizes as a dimer 80, 81. However, the monomeric form has been identified as the dominant form in solution showing a significantly higher stability than the dimeric variant 80, 81. In line with this notion, HOs from A. thaliana (AtHO-1/HY1, AtHO-3/HY3, AtHO-4/HY4) are active monomeric HOs able to convert heme to biliverdin IXα 10.