The heme oxygenases are key enzymes in the oxidative degradation of heme to biliverdin (biliverdin IXα), carbon monoxide (CO), and ferrous iron (Fe2+) 1, constituting the heme oxygenase (HO) family of molecular chaperones which is also known as HSP32 family. The HO family represents a group of well-conserved proteins with molecular masses ranging from 14 kDa in humans to 49 kDa in E. coli. Two main isoforms are expressed in mammals: HO-1 and HO-2. While HO-2 is constitutively expressed under basic requirements in the majority of human tissues, HO-1 represents the inducible HO variant whose expression is highly up-regulated upon exposure to different kinds of stress 2-4. Functional genes encoding HOs map to several chromosomes as given in Table 2. Human HOs are encoded by two different functional protein-coding genes (HMOX1, HMOX2) 82 clustered on chromosome 22q12.3 and 16p13.3, respectively. A third isoform, termed HO-3 has been described in rats only and is supposed to be a pseudogene originating from the HMOX2 mRNA 40. Expression of the corresponding single-copy gene Hmox3 (HO3; Hmox2-ps1), which is absent in other mammals, could not be detected at the mRNA level in a genomic DNA-free liver library, neither at the protein level in kidney from rats 40. 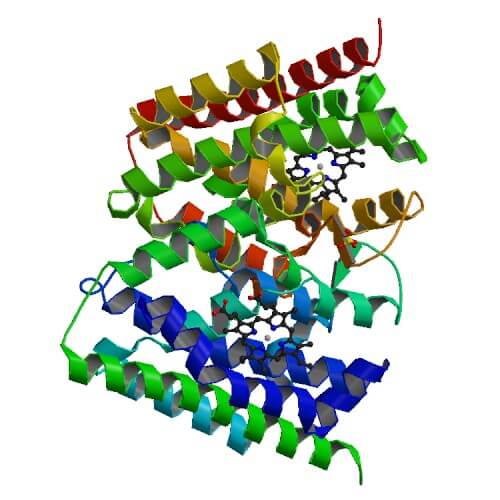 The coding sequence of the expressed human HO-1 protein consists of 288 amino acid residues yielding a molecular mass of 32.8 kDa. Recently, a novel splice variant of HO-1, harboring a 164-aa deletion (aa49 – 212 of 32 kDa HO-1) and a molecular mass of 14 kDa, was identified in human malignant cells 6. Unlike HO-1, HO-2 bears additional 30 amino acid residues at the N-terminus as well as two Cys-Pro dipeptides near the C-terminus yielding a protein with 316 amino acids and a molecular mass of 36 kDa. A second potential computationally mapped isoform has been described for HO-2 as the result of alternative splicing. The sequence of this isoform differs from the canonical sequence by the lack of amino acids 1 – 26, yielding a putative protein with 287 amino acids and a predicted molecular mass of 32.8 kDa. However, no experimental confirmation is available for the shorter isoform apart from the canonical sequence. Mature HOs are further processed by post-translational modifications, such as phosphorylation, acetylation, and possibly also palmitoylation.  HO-1 predominantly exists as a monomer in cells due to the lack of cysteinyl residues required for the formation of disulfide bridges 77. However, recent investigations revealed that HO-1 forms dimers/oligomers (Figure 2) in the ER via TMS/TMS interactions as a prerequisite for optimal structural and functional qualities of the molecule 61. In line with these findings, a truncated form of human HO-2 devoid of the sequence encoding the TMS at the C-terminus was found to form homodimers in solution 63 kDa in size 63.