Heme oxygenase 1 (HO-1) represents the ubiquitously expressed inducible isoform of the heme-degrading enzyme, heme oxygenase (HO). HO was originally identified in the 1960s as an essential factor in iron homeostasis, able to catalyze the first step in the oxidative degradation of heme 1, 27-29. In the same decade, parallel investigations made by the Italian geneticist Ferruccio Ritossa on the fruitfly Drosophila melanogaster suggested the existence of stress proteins by demonstrating that heat and several chemical stressors induced novel puffing patterns of the polytene chromosomes in the salivary glands of the fruit fly30-32. The expressed gene products were identified in the 1970s by the work of Alfred Tissières, consequently termed “heat shock proteins” (HSPs)33. Nowadays, it has become widely accepted that this process is common to any living organism 34, 35. Also in the 1970s, HO-1 proteins were first purified and solubilized from porcine spleen 36 and the livers of CoCl2 or heme-induced rats 37, 38. 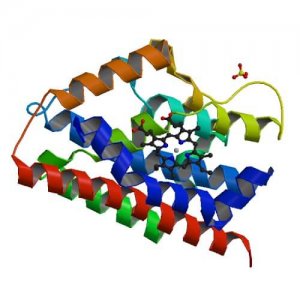 Figure 1. Crystal structure of human heme oxygenase 1 (HO-1) in complex with heme. The cartoon shows one copy of HO-1 complexed to one copy of protoporphyrin IX containing Fe (Heme) and one copy of sulfate ion (PDB 1n45) 60.

HO-2 was originally purified to homogeneity from rat testes by Trakshel and collaborators a decade later 2. Once again, a decade later a cDNA encoding a putative third HO isoform (designated as HO-3) was isolated and characterized from rat brain by the group of Mahin D. Maines 39. HO-3 was found as being highly homologous to HO-2 39. As the expression of HO-3 could not be detected at the mRNA level in a genomic DNA-free liver library, nor at the protein level in kidney from rats, Hayashi et al. proposed HO-3 as being a pseudogene resulting from alternative splicing of the HMOX2 mRNA 40. Almost 30 years after the discovery of HO-1, the first prokaryotic HO, HmuO, was described in the Gram-positive Corynebacterium spec. 41, 42. A further HO-like gene product (HemO) was identified in the Gram-negative organisms Neisseria meningitidis and N. gonorrhoeae at the beginning of the 21st century 43, 44. Over the same period, the HO ortholog Hmx1p was demonstrated in Saccharomyces cerevisiae as a stress protein in response to iron deprivation 45. In Candida albicans, Hmx1p was first reported as serving an essential function in iron assimilation from heme 46. The identification of the HO paralogs IsdG and IsdI in Staphylococcus aureus and MhuD in Mycobacterium tuberculosis highlighted the unique structure of HOs and gave rise to a novel mechanism for heme degradation 47, 48. Meanwhile, microbial HO-like enzymes have been reported in more than 4,000 bacterial species, >500 fungal species, and at least in six archaeal species. The presence of an HO ortholog in plants was revealed by Davies et al. who identified the HY1 gene in Arabidopsis thaliana encoding a HO-related protein that is essential in bacteria, algae, and animals for the conversion of heme to biliverdin 49.

In recent times, the group of Rex M. Tyrrell reported on the up-regulated expression of a 32 kDa stress protein (p32) in human skin fibroblasts upon exposure to chemical and physical stressors 50, 51. Independent cloning of p32 from human and mouse cells identified p32 as being identical to HO-1 51, 52. Even though HO-1 has originally been described as being a heat shock protein in rats 53, continuing investigations identified the restriction of HO-1’s thermal responsiveness to rodents 53-55. The intracellular location of HO-1 to the ER has been verified by Yoshida et al. within the same decade 56. The crystal structure of human HO-1 was reported first by Schuller and co-workers (Figure 1), revealing a novel helical structure with conserved glycines in the distal helix, providing flexibility to accommodate substrate binding and product release 57. More recently, the crystal structures of the prokaryotic HO ortholog from N. meningitides 58 and a truncated rat HO-1 isoform 59 exhibited a high degree of similarity to human HO-1. The group of Thomas L. Poulos determined higher resolution structures of human apo-HO-1 and human HO-1 complexed to heme, thereby disclosing important new structural features 60. Chemical cross-linking, co-immunoprecipitation, and fluorescence resonance energy transfer (FRET) experiments revealed that HO-1 forms dimers/oligomers (Figure 2) in the ER through critical contribution of the C-terminal transmembrane segment (TMS) which plays an essential role in the intra-ER self-assembly of HO-1 61. Early X-ray crystallographic analyses on HO-2 performed by Bianchetti and colleagues provided exciting insights in the catalytic center of HO-2 62. Structural insight into the heme regulatory motifs (HRMs) in HO-2, two C-terminal Cys-Pro dipeptides, was given by the group of Stephen W. Ragsdale who demonstrated that the C-terminal region including the two HRMs interacts with the catalytic center of HO-2 63. Most recent investigations identified HO-2 as being a cellular myristate-binding protein crucially involved in HIV replication and host immune responses 64.

Several important residues crucially involved in the catalytic process have been identified with an imidazole nitrogen of a conserved histidine in the catalytic domain (His25 in HO-1 and His45 in HO-2) being the key residue for heme iron ligation (Figure 3) 57, 62. Recently, a novel HO-1 splice variant of 124 amino acid residues and a molecular mass of 14 kDa was identified by Bian and colleagues in the cytoplasm of human malignant cells where it promotes cell proliferation and increases the relative length of telomeres in vivo and in vitro 6. In the course of the last years, HO-1 and heme metabolites such as CO have been implicated in the pathogenesis and therapeutics of a multitude of human diseases including inflammatory and infectious diseases as well as cancer.